ThoughtCatalog.com, you have really outdone yourself.  Your post, How To Be A Sister, almost got me to tears.  I have a sister that is 15, and I could honestly not imagine life without her. The article basically describes our relationship pretty well. 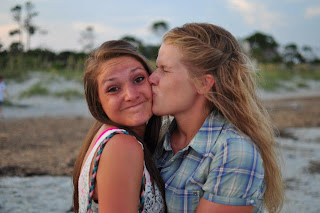 My sister is basically my best friend.  We have the strangest relationship.  Most of the time, I’m scolding her for grades or sounding stupid or her using foul language. (When she cusses I respond with “Watch your damn language.”)  In certain situations, sometimes she’s the one that yells at me.  Granted, I’m nowhere near a bad kid.  But we just both look out for each other.

In the article, the author talks about her relationship with her sister:

“You fight. At first, you are children and the fights are for no reason. Someone took a dolly, someone pinched the other, someone ate from someone else’s plate. One time I strung your Barbies up on the ceiling fan and told you they’d all killed themselves. Another time, I convinced you our two best friends, brothers, were possessed by demons. You hit me on the back with a baton so hard I had a red welt for weeks. When someone else at school bullies you, I show up at your lunch table and stare them down until they cry. You once punch someone in the face for me at summer camp. We can say whatever we want to each other, but everyone else better step off. We start to fight about different things. Your behavior, your grades, your friends. I am older so I become the third parent — or in some regards, the only parent. And yet you still confide in me and I in you.”

This paragraph made me crack up.  When Hannah was a kid, I would torture her by telling her that she was adopted and we found her in the open field behind my house.  This would send her off crying towards mom and dad, and I would be left there laughing my ass off.  Another time she was holding the duck stuffed animal that she has had since birth and she was being stubborn.  So I started pulling on the stuffed animal which only resulted with me flying across the room holding the head of the duck, and her holding the body of her precious animal.  Boy was that a fun night full of her crying and my mom trying to perform surgery on a headless duck. 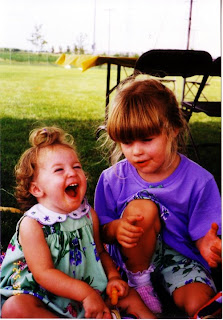 I guess all close sisters have those kind of memories.  I can bully her endlessly, but as soon as someone who’s not me steps into the picture, I’m ready to make those little sh*ts cry until they never bother her again.  It’s the bond I have with her.  I actually had a night terror the other night which was about someone threatening to take her away from me and harm.  I woke up screaming her name and had to text her just to make sure she was okay.  The thought of losing her or not being able to protect her makes me sick.  It’s my job as the older to be her third parent.  My parents do a wonderful job raising her, or at least they try their best to keep her on the right path.  I see myself as the back up parent, or the secret agent that gets sent in to make sure she’s being molded and raised well.

“Being a sister means feeling responsible for someone else all the time. It means having a built-in best friend and someone who can, during an argument, call you out for shaving your eyebrows off in the fifth grade.”

In her case, when she was 7 she tried to cut a pony tail out of her hair that had gotten tangled.  She wanted to do it by herself and it resulted in a little trail of hair going from her room into the bathroom.  She had chunks of hair sticking up straight out of her head for a couple months.

“Being a sister means communicating in inside jokes and shorthand and pointed looks when mom starts in on the red wine. It means fighting about whether or not “Glee” is a good show, but being able to quote every episode of “Arrested Development.” It means defending someone, even as you slap them upside the head for being an idiot. It means waking up at 7 in the morning to a one phone call from jail. It means wading through photos of outfits so you can help them pick the best one for their job interview even though you are at work. It means using two forks on one big strawberry cheesecake at 12:30 p.m. while you talk about why dating sucks. It means crying on the phone. It means sharing hairbrushes and a bathroom and shampoo. It means coming out to them and having them say, “Yeah, so? I love you. Who cares?” It means tolerating family vacations and straightening the back of the other’s hair so it’s perfect and wandering around the mall for no reason because it’s another Saturday in high school and everything sucks anyway. It means growing up with someone and watching someone else grow up. And mostly, ideally, it means you are never alone.”

My sister is my best friend. She’s my maid of honor (in 10 years of course). She’s my other half. She may be a little brat sometimes, but I know I have my moments too. We’ll always be able to look at each other and say, “You know what? You screwed up big time. But it’s going to be okay. Because I still love you.” And no matter where we are, no matter what our futures or pasts hold, I will ALWAYS be there for her.  Because we are each others sisters, and therefore one half of each other.